Edward Flatau and his place in the history of neurology

Edward Flatau and his place in the history of neurology 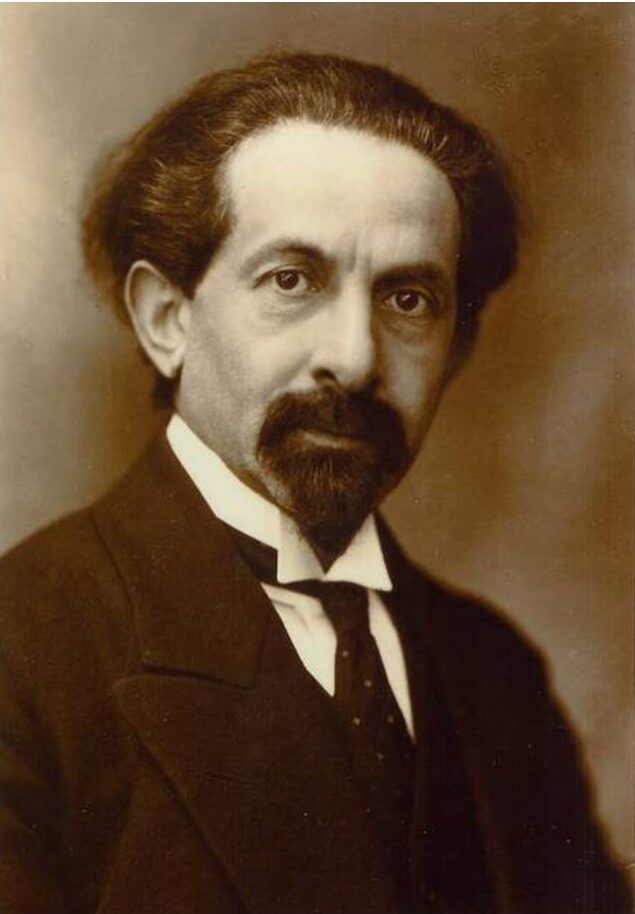 Edward Flatau, the co-founder of modern neurology in Poland, completed his medical studies at the Medical Faculty of the Imperial University in Moscow, which had an established position not only within the Russian Empire. The lecturers who had the greatest impact on the young medic were Aleksei Kozhevnikov, the teacher of a numerous group of neurologists and psychiatrists, known among other things for his work on epilepsy, and Sergei Korsakoff, who is permanently etched in the history of medicine for his description of the amnestic syndrome in people who abuse alcohol, which is still called the Korsakoff’s syndrome. When Flatau received his physician diploma in 1891, he had already decided to dedicate his life to neurology.

Less than two years later, he had the opportunity to begin a scientific internship in Berlin to deepen his knowledge in the field of neurology and neuroanatomy, learning under the direction of, for example, Emanuel Mendel, who is known for his research on epilepsy and progressive paralysis, and Heinrich Wilhelm Waldeyer, an anatomist, physiologist and pathologist, whose rich work included articles on the histology and histopathology of the nervous system.  The stay in the capital city of Germany was fruitful for Flatau. The best proof of this was the publication of the Atlas des menschlichen Gehirns und des Faserverlaufes [Atlas of the Human Brain and the Course of the Nerve Fibres], the foreword to which was written by Mendel, as soon as 1894. It was a real breakthrough in the imaging of nervous system structures and the work done by Flatau gained the highest esteem. The use of a completely original technique to take specimen photographs provided a truly astonishing precision of anatomical detail depiction. Originally published in German, the atlas was soon translated into English, Russian, French and Polish, becoming a model for this type of compilations worldwide. The atlas had a second, expanded and supplemented edition in 1899. Sigmund Freud, who himself often used the work of Flatau, wrote a downright enthusiastic review.

In 1897, Flatau presented the results of his scientific investigation which led to the discovery of the rule of eccentric arrangement of long fibers in the spinal cord. The rule described by the Polish researcher that the greater the length of the fibers, the closer they are situated to the periphery, would soon be named Flatau’s Law. Two years later, thanks to the above-mentioned discovery, Flatau gained a doctoral degree.

The young physician’s already well-established position is evidenced by an invitation from Buenos Aires, in which Flatau was offered the role of the chair of the neurology department at the local university in 1898. However, he decided to return to Warsaw. In 1899, he took up residence at Marszałkowska Street, where he opened a private practice. At the same time, he was still conducting scientific research, constantly keeping in touch with leading research centers. In 1906, he visited the famous psychiatric clinic in Munich, which was managed at the time by Emil Kraepelin, and he authored the chapters on brain and spinal cord tumors in the massive, five-volume textbook edited by Max Lewandowsky. At the same time, he was constantly making endeavors towards establishing an adequately equipped laboratory for neuroanatomical research in Warsaw.

The Psychological Society was established in 1907. It was there that Flatau managed first a microscopy laboratory, which was originally located in a private apartment at Jerusalem Avenue, and later on the Neurological and Biological Laboratory operating within the Marceli Nencki Institute. Earlier, in 1904, he became the head of the neurology department of the Jewish Hospital in Czyste in Warsaw. He held this position until his death in 1932. 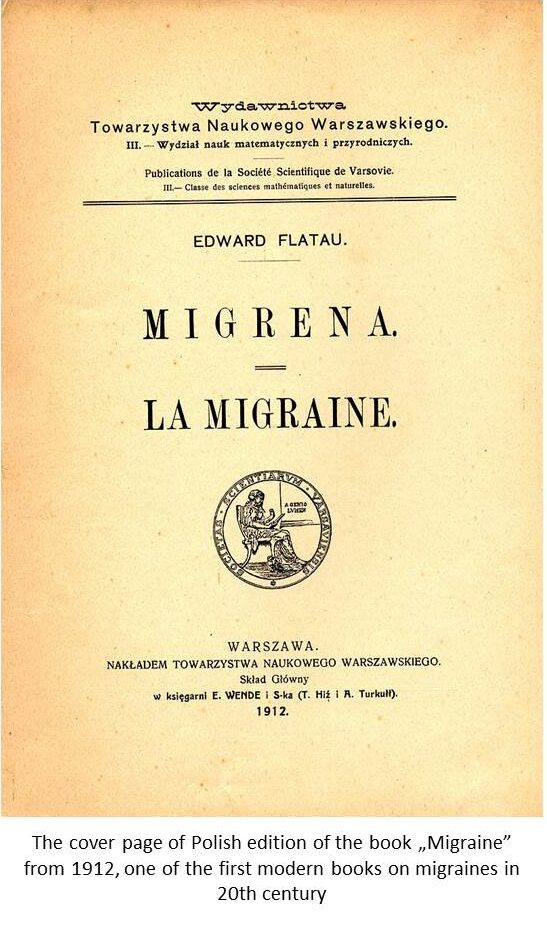 Flatau perceived neurology as a close combination of anatomical, histological and physiological studies with clinical observation. Although it is difficult to indicate a single direction of scientific interests which would be dominant in his work, one can see that he devoted great attention to the physiology and pathology of meningeal phenomena, as well as to inflammation in the nervous system and neoplastic diseases. He eagerly cooperated with others, as was the case during the studies on the nature of torsion dystonia in children. Together with Władysław Sterling, he demonstrated then that the underlying cause of torsion infantile spasms was not neurosis, which had been the commonly accepted explanation for the etiology of this disease, but they were in fact a consequence of lesions in the basal ganglia of the brain, which they argued was hereditary in nature.

The compilation on migraine, a disease from which Flatau himself suffered, was innovative. In 1912, the Polish scholar indicated the need to look at its etiopathology in a comprehensive, multilateral manner which should include research on the central and autonomic, vascular and metabolic, as well as endocrine systems. Flatau argued that migraine is not a spontaneous disease, but a pathological phenomenon determined by a series of processes occurring in the organism. 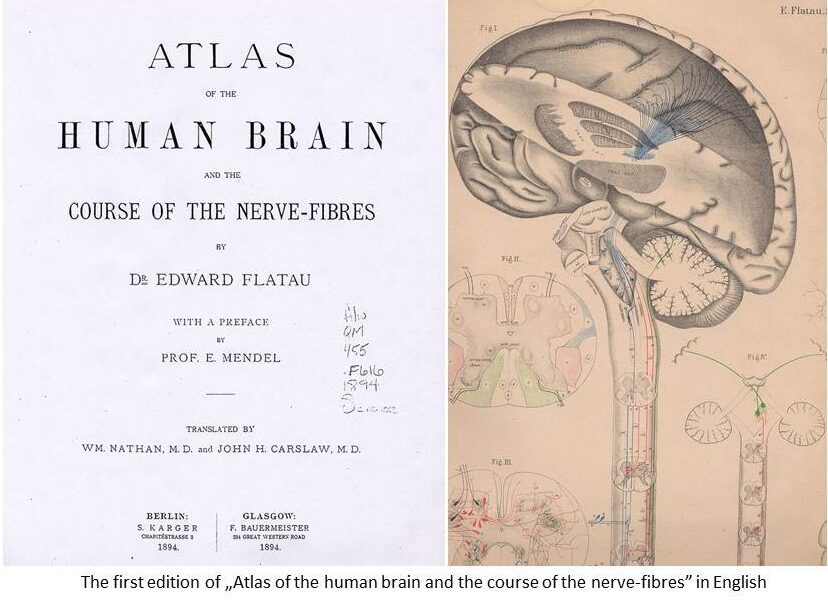 His work on the diagnosis and therapy of brain and spinal cord tumors are also noteworthy. His research was based both on carefully selected clinical material and animal experimentation with transplanting cancers into mice. Flatau also was one of the first to indicate the need for surgical treatment of brain tumors in combination with post-operative X-ray irradiation.

The signs of encephalitis described by Flatau gained a large clinical value. The first of these, called the neck mydriasis sign, was characterized by pupil dilation upon passive forward neck flexion. The second one, called the erectile sign, involved an involuntary erection upon repeated passive forward bending of the torso. The former remains diagnostically valuable in all types of meningeal inflammation, regardless of origin. The latter occurred mostly in cases of inflammation in the course of tuberculosis.

Edward Flatau remains one of the most important characters in the history of Polish (and not only Polish) neurology. A large part of his work is still significant in the practice and theory of medical sciences to this day.

Edward Flatau and his place in the history of neurology [EN] (176.13 KB)
Home page