The history of tomography

The history of tomography

In 1913, the American physicist and inventor William D. Coolidge decided to use a tungsten filament as a cathode in an X-ray tube, utilizing its ability to emit electrons when incandescent. That is why the Coolidge tube is colloquially referred to as the “hot cathode” tube. When compared with other designs, it emitted more X-ray radiation and allowed adjusting the current independent of high voltage. The solution developed by Coolidge proved to be a breakthrough in the history of radiology, giving rise to many of the later X-ray tubes. 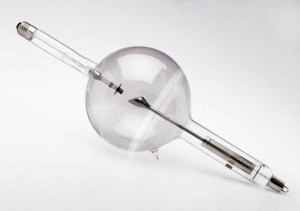 Meanwhile, in December 1913, doctor of medicine Karol Mayer, who was associated at the time with the X-ray laboratory of the Internal Medicine Clinic at the Jagiellonian University, published a text in which he presented an original idea of the simultaneous use of two X-ray tubes. Two tubes with a similar power were arranged in a straight line, one behind the other. Mayer wanted to amplify X-rays in a way similar to focusing a beam of light with the use of lenses. Mayer provided accurate calculations and relevant formulas to precisely position the tubes relative to each other and to determine the distance from the irradiated object. This was a significant beginning of his further experiments with X-ray radiation.

Shortly after, in February 1914, at a meeting of the Cracow Medical Society, Mayer presented to the audience selected issues in the radiological technique area. He discussed, among other issues, the ability to obtain a “clear” image of the heart, which was then considered to go beyond the contemporary technical capabilities. Opacities caused by enlarged glands, pleural synechiae, densified lung fields or scarring lesions were visible in the chest X-rays. In the image plane, they were very often merged or overlapped with the cardiac silhouette outline, which resulted in correct imaging being difficult or even impossible.  Having combined the knowledge of the topographical anatomy of thoracic organs with the rules of physics governing X-ray radiation and the laws of optics, Mayer proposed a simple yet groundbreaking solution. Trials showed that appropriately designed X-ray tube movements during an examination could significantly reduce the appearance of opacities originating from other organs and thus “reveal” the cardiac silhouette. According to the abstract of Meyer’s presentation: “The heart, which is closer to the X-ray plate, produces an opacity that is barely moving with the tube movements. As it is larger than other surrounding opacities, this opacity moves only slightly from its position on the X-ray plate when the tube is moving […].” The switch from a previously static X-ray tube to a planned movement and the resulting intentional blurring of the image of surrounding structures was in fact the foundation of the future X-ray tomography.

During the next months, Mayer worked to improve his technique, meanwhile gaining invaluable experience. In summer 1914, during the sessions of the 2nd Congress of Polish Internal Medicine Physicians in Lviv, he gave a lecture titled Fotografowanie wyłącznie samego serca [Photographs of the Heart Alone], which was illustrated with scrupulously prepared radiographs. He was ready to finalize his experiments.

The outbreak of the First World War with Mayer being drafted into military service significantly reduced his ability to conduct further systematic studies.  Having overcome the mounting adversities, he finally managed to publish a monograph entitled Radiologiczne rozpoznanie różniczkowe chorób serca i aorty z uwzględnieniem własnych metod badania [Radiological Differential Diagnosis of Cardiac and Aortic Diseases with the Use of Own Examination Methods] (Cracow, 1916), which may be considered a fundamental paper in the history of X-ray tomography.

Mayer suggested that the X-ray tube, which he placed in a box-like clamp mounted on support stands, be moved in rapid, yet clearly spatially-restricted (to a distance of just 8 cm) movements.  The movements were supposed to be oscillatory and parallel to the longitudinal or transverse axis of the body. This way, as he wrote, it was possible to achieve “either a complete elimination of opacities originating from structures other than the heart and major vessels or their partial separation so that it is possible to distinguish the shape of individual arches.” What is more, the Polish scientist provided a mathematical (geometrical) proof in the form of a relevant formula describing the phenomenon of moving and blurring of the opacities as a result of the tube movements. The publication was also profusely illustrated with radiographs along with a detailed description of the results he then obtained.

As it was published in wartime, in Polish only and in a small run, it went practically unnoticed, apart from the reviewers of the author’s academic achievements in the course of his habilitation process in 1917, Prof. Walery Jaworski and Prof. Marian Smoluchowski. However, Mayer’s achievement gradually became present over time – first in Poland and then abroad. But it was never properly recognized.

Meanwhile in 1916, the French dermatologist André Bocage, unaware of Mayer’s findings, began his deliberations on how to use a movable lamp and a movable plate cassette according to strictly determined geometrical patterns. The model proposed by Bocage, not even tested in practice, was in fact identical to Mayer’s solution and had the same objective, that is to reduce any undesirable opacities. The difference, and a quite significant one at that, was “putting in motion” the other component of the system, i.e. the X-ray plate, relative to the patient’s body. And although Bocage took care to patent his solution in 1921, it did not arouse much interest at the time. Initially, it consisted entirely of theories and hypotheses.

It was not until the next decade that a number of innovative solutions would come about. In 1930, the Italian researcher Alessandro Vallebona developed the theoretical foundations and constructed a prototype of a machine that allowed the extraction of subsequent “slices” in radiological imaging as a result of the tube and plate moving around the patient’s body in reciprocal directions. He referred to his method as stratigraphy, and the device he constructed may be considered as the first working tomograph. A year later, the Dutch radiologist Bernard G. Ziedses des Plantes presented in his doctoral dissertation an original solution for the above idea, which he called planigraphy. He was the first to obtain an undistorted sliced photograph of the living human body. Finally, in 1934, the German constructor and manufacturer Reiniger-Veifa Gustav Grossmann, who had been associated with Siemens for many years, patented a significantly simplified and technically better-thought-out machine that was the first to enter serial production. Its manufacturer, Sanitas Berlin GmbH, accepted the name tomograph proposed by Grossman, which due to increasing sales spread throughout Europe and later beyond the Atlantic Ocean as well. In this machine, the tube and plate were mounted at two opposite ends of a pendulum which would swing throughout the exposure time within a precisely determined arc range. The whole system did not change its position, unlike the specially constructed table that was integrated with it.

Mayer began to report his contribution to the development of modern radiology relatively late, demanding the acknowledgment of priority for his invention first in private correspondence and later also in official publications. It should be emphasized that in the interwar period, Mayer established from scratch the academic department of radiology at the University of Poznań – the first one in Poland.

X-ray tomography was an important prelude to computed tomography that has its origins in the works of mathematicians. It is again worth noting that in 1937, the Polish scientist Stefan Kaczmarz, one of Stefan Banach’s associates and thus a member of the internationally famous Lviv school of mathematics, presented an original method for solving linear equations  (called the Kaczmarz method), which along with the theoretical assumptions of Alan Turing constituted the foundation of modern CT techniques.

In the early 1950s, the South African physicist Allan MacLeod Cormack, who worked at the time at the University of Cape Town, began his research on the absorption of X-ray radiation by various tissues, assuming that the X-rays’ ability to penetrate the tissues is reduced by the tissues’ different density. When he moved to the United States in 1956 to work at the Harvard University, Cormack continued his work and reached a conclusion that having determined the mean radiation absorption rates for various tissues, one might attempt to establish a mathematical method for obtaining multidimensional, detailed images of the inside of the human body. After several years of constructing theoretical models, at the beginning of the next decade, he was ready to work on a prototype device that was finally constructed in 1963. And although Cormack published the results of his experiments, they did not draw much attention.

Four years later, independent from Cormack, Godfrey Newbold Hounsfield who worked for the Central Research Laboratories at EMI Ltd. began his research on tomography, initially testing the properties of gamma rays. He also decided to use computers available at the time for complex calculations. This is how the first computed tomograph was developed, although back then this machine was highly imperfect in terms of construction of and unreliable in terms of performance. Nonetheless, it was this device, which was patented in 1968, that initiated the era of computed tomography. Cormack and Hounsfield were awarded the Nobel prize in 1979.