The history of the artificial eye

The history of the artificial eye

The idea to construct a so-called artificial eye, a device which would allow people completely deprived of vision to gain orientation in the surrounding space, was an original solution proposed in the 1880s by a Pole, Kazimierz Noiszewski, whose figure is worth a closer look here. 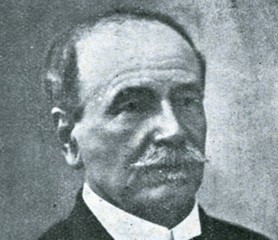 Kazimierz Noiszewski (1859–1930), born in Vilnius, completed his medical studies in Moscow and later specialized in ophthalmology in Cracow, Vienna and Paris. He was the owner of an ophthalmology clinic in Pohulanka over Daugava and a lecturer at the Military Medical Academy in Saint Petersburg, with which he remained associated until 1918.

When Poland regained independence, Noiszewski was first given professorship of ophthalmology at the reactivated Vilnius University and, later on, he accepted a professorship at the University of Warsaw starting from 1921. He was already one of the most recognized and esteemed Polish ophthalmologists. He died suddenly on 5 July 1930. He was buried at the Powązki Cemetery in Warsaw.

In the history of medicine, Noiszewski’s name is associated with the development of an electrophthalm, or the so-called artificial eye, a device intended for the blind, which functioned based on converting optical stimuli to sensory ones. Noiszewski worked on the operation diagram of an electrophthalm in 1887–1889. He reported his invention in an article published in “Gazeta Lekarska” [Medical Gazette], which was a written down version of a presentation made by this Polish physician during the 3rd Convention of Russian Physicians in Petersburg in 1889. 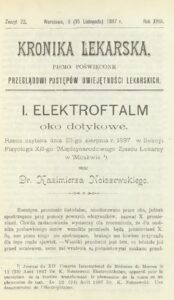 The idea of constructing an “artificial eye” already existed in the world of science and it was even vividly discussed. In 1876, Werner von Siemens from Germany constructed an original device: an artificial eye whose eyelids responded to light intensity. Its artificial retina made of selenium would only conduct electric current when illuminated. Then the induced electromagnet would close the artificial eyelids.

The principle of operation of the device was based on the variability of selenium conductivity due to the action of light, a phenomenon which was already known at that time. Noiszewski was aware of this when starting his own work, and the model proposed by Siemens was an incentive for Noiszewski’s own research on this issue. It can be said that he decided to use the properties of selenium to convert light to tactile stimuli and to produce a device which could assist blind people with spatial orientation in a practical manner. He called his concept “tactile seeing”.

When outlining the theoretical assumptions of the planned solution, Noiszewski considered constructing a device which would adhere closely to the skin on the forehead. Its posterior wall would be in fact a thin selenium plate. As he specified, “The electric current will flow through the plate to the forehead each time a bright or illuminated object is reflected on the plate.” At the same time, he assumed that the electric impulses, which would not carry an unambiguous information for the patient on their own, should be converted to magnetic (electromagnetic) impulses, which in turn should be converted to tactile stimuli.

However, when it came to the realization of the project, there were technical difficulties which forced Noiszewski to introduce certain modifications. Converting electromagnetic impulses into tactile stimuli proved to be the greatest obstacle. For this reason, he decided to try to replace tactile sensations with thermal sensations, following the suggestion of technicians and engineers. In order to verify how much the sensitivity of thermal sensations received at the skin surface was concordant with the sensitivity of tactile sensations, he constructed a topothermoesthesiometer.

The experience gained ultimately allowed the construction of the electrophthalm, which Noiszewski also called the electrophthalmocyclope. The device consisted of three components arranged in layers. The first, external one was uninsulated metal mesh. The second, middle one was an adjoining selenium plate. The third one was a densely arranged group of rods resembling a brush, whose ends were in contact with the selenium plate on one side and the skin of the forehead on the other. As he explained: “The spot on the selenium plate illuminated by this image will become conductive for electric current and the current will flow only onto the number of sticks equivalent to the illuminated spot.”

These would heat up with the temperature dependent on current intensity and the resistance of the conducting rod. Noiszewski claimed that the stimuli received by the skin would not only allow “sensing” the presence of an illuminated or shining object, but they would reflect its shape as well. Moreover, the electrophthalm would provide a relative orientation as to the distance between the device and the object and allow determining the object’s location on the vertical and horizontal axis. In other words, it would enable a relatively good spatial orientation.

The proposal submitted by Noiszewski aroused a lot of interest and comments, which is understandable. In 1891, Noiszewski published another article on the electrophthalm in the January issue of the renowned journal “Centralblatt fur Nervenheilkunde und Psychiatrie.” Within a few years, numerous reviews and opinions concerning the Polish ophthalmologist’s invention were published, authored by Dedichen, Donnini, Szarwin and Tarkhanov, among others. One of the founders of modern neurology, Jean Martin-Charcot, to whom the Pole’s invention was demonstrated during the world exhibition in Paris, expressed a great interest in the device. There were also voices of critic. Meanwhile, Noiszewski was working to enhance his electrophthalm, which was already called a “tactile eye” at that time. He presented another modification of the device in 1897.

Noiszewski’s device was of interest not only in medical circles. As he recalled later, the electrophthalm caught the attention of Thomas Edison, who considered the possibility of transmitting light images directly to the brain, omitting the eye, using X-rays. In turn, Edmund Fournier d‘Albe from the University of Birmingham constructed an “optophone” in 1913, using the solution proposed by Noiszewski as a starting point. The device utilized selenium photosensors to detect enlarged black printed letters and convert their image to acoustic signal which could then be interpreted by a blind person.

Noiszewski wanted his electrophthalm, the next modification of which was to convert images to acoustic signals, to allow further enhancements and ultimately to enter general use. He still expressly stressed it in 1930. However, the issue was not resolved at the time and it seemed that the entire idea was forgotten. It returned, but only in the post-war years, when the benefits from this type of solution were suggested by the biologist Jan Dembowski, among others. 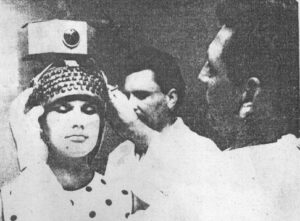 In the beginning of the 1960s, Witold Starkiewicz (1906–1978), an ophthalmologist, professor of the Pomeranian Medical Academy in Szczecin, decided to return to the idea of Noiszewski’s electrophthalm. However, he thought that it would be necessary to eliminate the acoustic effects and replace them with tactile stimuli. The interference with auditory sensations which play a crucial role in the lives of blind people, which would be unavoidable when using the “acoustic electrophthalm,” could be eliminated by constructing a “tactile electrophthalm.” Thus, it was a return to Noiszewski’s original design. Starkiewicz began working on the electrophthalm together with Prof. Tadeusz Kuliszewski, the head of the department of teletransmission devices of the Wrocław University of Technology.

The consecutive versions of the device were tested in the 1960s and 1970s. The new device would ultimately contain a system of 300 photocells (originally, 120 were installed) which, when induced, would activate a set of vibrators (pointers) of the electrophthalm. These, in turn, could be said to “press” the image of the surroundings on the patient’s forehead. All of the components were installed in a special helmet. Starkiewicz’s electrophthalm was designed in its entirety and patented at Polskie Zakłady Optyczne, arousing a large interest, both in Poland and abroad.

It is worth mentioning that the possibility of surgical placement of a microplate just behind the retina of the eye started to be considered at the turn of the 1950s and 1960s, which would be the beginning of research on the retinal prostheses used today. In this context, the research of the Polish scholars acquires great significance and may even be deemed pioneering.